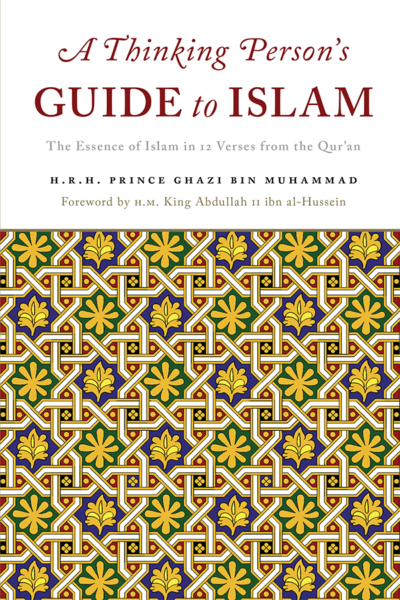 A Thinking Person’s Guide to Islam

The Essence of Islam in 12 Verses from the Qur’an

The world is at a crossroads today. A tiny minority of Muslims seems to be bent on hijacking the religion of Islam and bringing it into perpetual conflict with the rest of the world. Because of their actions, very few non-Muslims understand the real difference between Islam as it has always been, and the distorted perversions of Islam today. This book is an attempt to positively say what Islam actually is—and always was—as well as what it is not.

Easy to read, easy to understand and easy to swallow and digest. It very beautifully explains what Islam really is, how it is explained in its sacred texts, and how it has been understood throughout centuries by the overwhelming majority of Muslims.

Much anxiety comes from not properly understanding what others think or believe. One example today is the widespread misunderstanding of Islam. So when a respected scholar of Islamic philosophy such as Prince Ghazi bin Muhammad writes A Thinking Person s Guide to Islam, it is of global significance. I welcome the publication of this book, convinced that interested readers will find much in it to inspire them and set their minds at rest.

A salient account of a mighty faith drawn in deft strokes by an insider. Edifying, broad, and stimulating.

H.R.H. Prince Ghazi bin Muhammad bin Talal of Jordan (b. 1966 CE) was educated at Harrow School, UK; received his BA Summa cum Laude from Princeton University, NJ, USA; his first PhD from Trinity College, Cambridge University, UK, and his second PhD from Al-Azhar University, Cairo, Egypt. He is a Professor of Islamic Philosophy and his book Love in the Holy Qur an has been widely acclaimed, has gone into ten editions and has been translated into a number of languages. He also serves as Chief Advisor for Religious and Cultural Affairs to H.M. King Abdullah II ibn Al-Hussein of Jordan.